Epenthesis in Scottish Gaelic primarily refers to vocalic epenthesis (also known as Svarabhakti), which is generally understood as the insertion of a vowel within a consonantal sequence. Vocalic epenthesis is closely related to syllabification and is subject to stringent phonological conditions on the part of the surrounding consonants. The locality, prosody and identity of epenthetic vowels are nevertheless predictable. Researchers however debate the phonological mechanisms that render those characteristics. Two such accounts are exposed below.

Type A (see the article Hiatus for more details) relates to the syllabification of vocalic sequences -- VV [duən] poem vs. V.V [du.an] hook

Clements reports an observation first made by Borgstrøm (1937) that "the break in the tension [occurring at the location of the dot – GNC] is a phenomenon which occurs in positions where a consonant could be expected, a kind of ‘consonant without oral articulation’, comparable to h" (150). This remark leads Clements to assume that the underlying contrast of syllabification is really one of /VV/ vs. /VCV/ where C represents a silent consonant devoid of any segmental features except for syllabicity (i.e. [-syllabic]). Clements conjectures that such resulting hiatus might be the reflex of a historical loss of the intervocalic consonant. Illustrative examples are provided below (adopted from Clements 1986: 333): 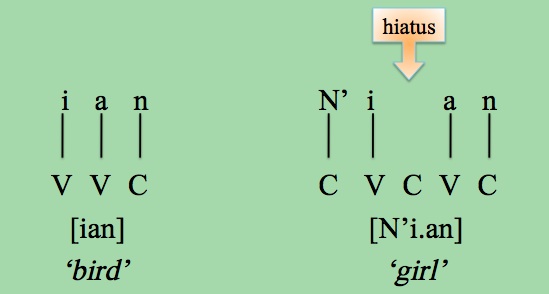 Borgstrøm (1940) reports that “[n]ative speakers are described as distinguishing between the two types of words [i.e. (2) and (3)] in deliberate speech, syllabifying faNak crow as [faN.ak], while declaring that in ʃaLak [ʃa.Lak] hunting the L and the k are inseparable” (153). Clements proposes that this difference of syllabification is the result of svarabhakti, which "occurs before the sequences [hp, çk', xk] only if preceded by a nonlenited plain consonant , i.e. /N, L, R/." (1986: 327). 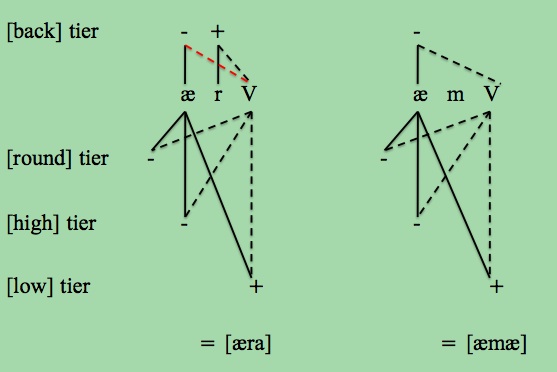 While Clements' account manages to capture the locality and identity of epenthetic vowels, it nevertheless fails to take into account the prosodic properties of such vowels (i.e. stress and pitch level).

Bosch (1995) adopts a gestural approach to the treatment of syllabification and vowel epenthesis in the Barra dialect. Her argument crucially rests on a gradient (rather than discreet) approach to syllable constituency, where the syllable formed by the epenthetic vowel is an extension of the original syllable.

Unlike previous accounts (Clements 1986, Ni Chiosáin 1994, Halle 1995), Bosch's analysis seeks to arrive at a justification for the particular prosodic characteristics of the epenthetic vowel, namely the fact that both the original and epenthetic vowels have (somewhat) equal stress and pitch level (Borgstrøm 1937, Bosch & De Jong 1997). Espousing the theoretical tools made available by articulatory phonology, she claims that "epenthesis can be viewed as the result of a premature articulation of the sonorant gesture, which is itself superimposed upon the preceding vocalic gesture" (10). The following gestural representation shows epenthesis as a readjustment in timing (adopted from Bosch 1995:11).

As a result, epenthesis is no longer thought of as the consequence of an additional tongue body (vocalic) gesture, nor as an additional vocalic slot on the timing tier, nor as an additional word-internal moraic position. The outcome is that there is only one long syllable carried out by the original tongue body gesture and bearing (somewhat) equal stress and pitch level. Such perspective has the benefit of accounting for the fact that putative disyllabic words composed of an epenthetic vowel are perceived to have a shorter initial vowel than ordinary (non-epenthetic) disyllables (Bosch 1995, 2003).